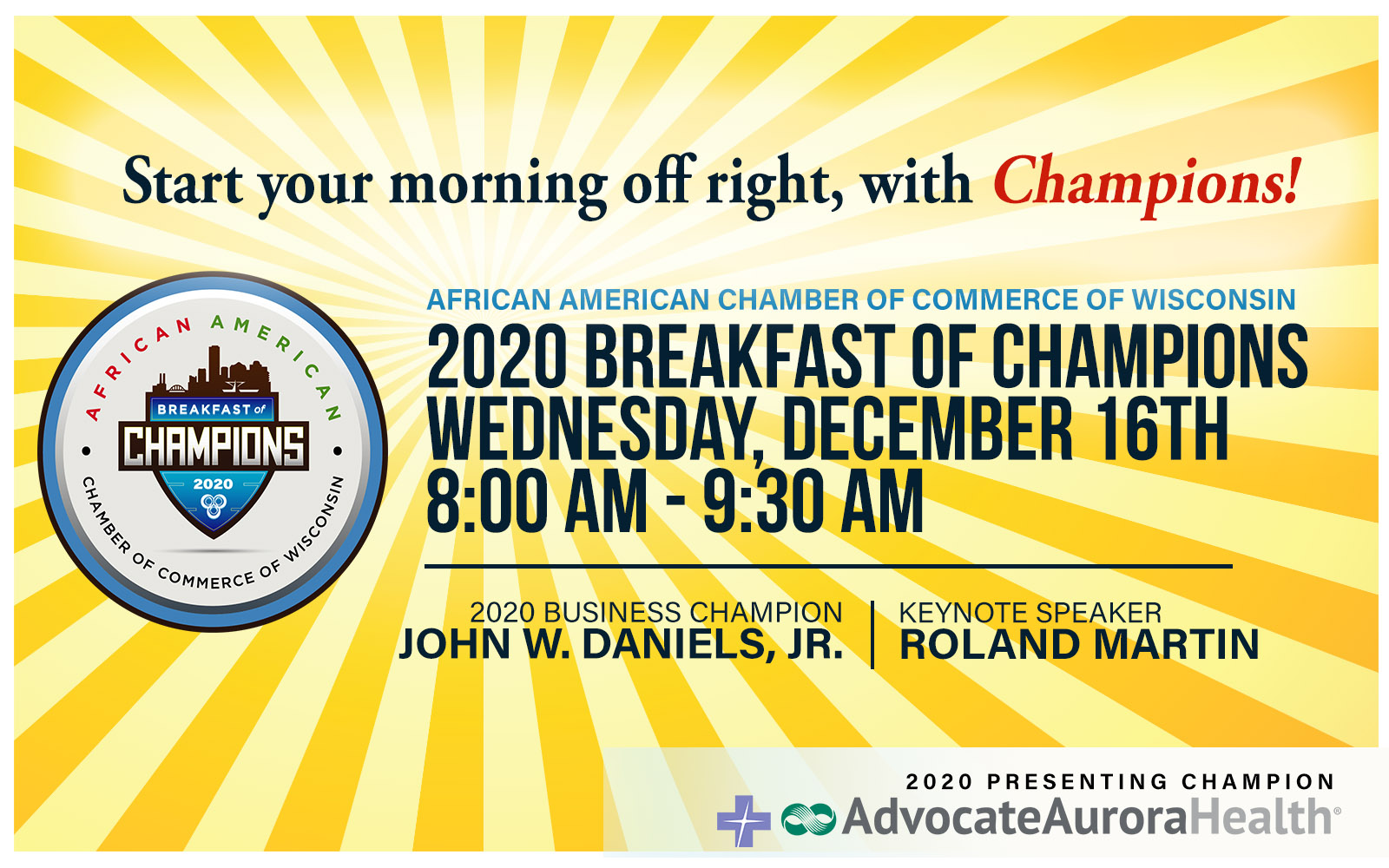 The Breakfast of Champions is the African American Chamber of Commerce of Wisconsin’s signature fundraising event aimed at bringing the Greater Milwaukee community together to support its mission and to honor a local business leader who is passionate about economic development and wealth creation in the African American community. This year, albeit virtual, will be a celebration of all that has been accomplished in 2020. 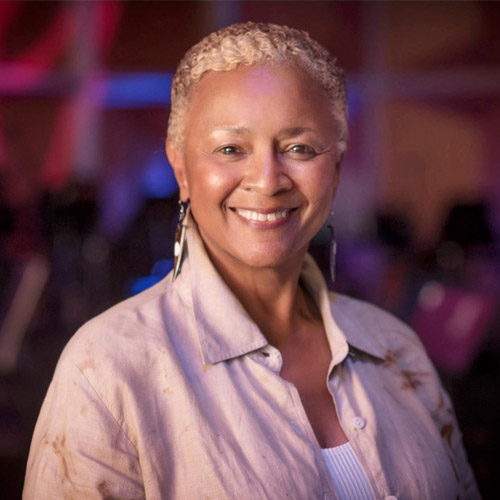 June Perry-Stevens was born in Columbia, SC into a family of entrepreneurs and activists. Her grandfather was the first African American to be licensed as an electrician in the state of South Carolina in 1920. Her mother was an artist and teacher of special needs children and the first African American to serve as a member of the Board of Trustees for the Columbia Museum of Art. Her brother was one of three students from A and T University shown in the now famous picture sitting at the lunch counter during the civil rights demonstrations in Greensboro NC.

June was educated in the segregated public schools of Columbia, SC and went on to receive her BS from NCCU, an HBCU, and her MSSW and completion of the course work for her Ph.D from UWM. Her professional career began at the Department of Public Welfare in Milwaukee as an investigator of child abuse and neglect. This led her to start a non profit in 1975, New Concept Self Development Center, focused on building on the strengths of families rather than removing children from their homes due to abuse and neglect, and woman often caused by lack of parenting skills and mental health issues.  She has a reputation for nurturing and coaching those who worked for her, many who have gone on to become successful as elected officials, political leaders, business owners and executives in the non-profit and corporate arena. June also prides herself in owning a commercial real estate portfolio that rents to seven African American and women owned small businesses. She helped them navigate COVID by offering rent forgiveness, installing protective work station barriers and providing PPE for their work-places.

After 32 years, June retired from New Concept in 2006 and, with a colleague, Beth Sampson Bauer, started BestEd Business, a company that sells office and educational supplies, furniture, safety supplies and PPE to the private sector, government, the trades and the construction industry. BestEd was in the City OSBD Business Capacity Building program and has won three year contracts to provide Safety Supplies and PPE to the City of Milwaukee and Milwaukee County.

BestEd provided the furnishings for the new offices of Running Rebels, Bader Philanthropy and the AACCW Legacy Building. In addition, in fall 2020, BestEd partnered with Outreach Community Health Centers, Radio Milwaukee 88.9 and MPS to provide over 6000 school back packs with supplies designed to help students with virtual learning. 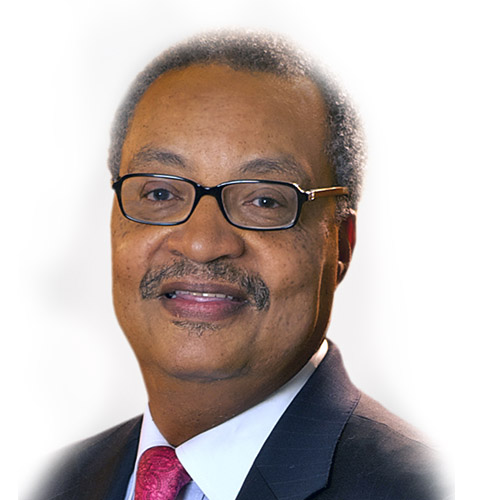 John W. Daniels Jr. is not only a national real estate and business expertwith an enviable client list of national corporate household names, he is chairman emeritus of Quarles & Brady, a strategic business advisor to many of the firm’s largest clients, a recurrently honored champion of diversity and inclusion, a much sought-after thought leader on multiple topics, awidely recognized pillar of the community, an active agent of organizational and civic change, and a crusader for high-quality education and access to it. He grew the firm impressively during the worst economy since the Great Depression, expanding its ranks of attorneys and adding new locations and national practice specialties in spite of the downturn, fundamentally transforming Quarles from its traditional legal industry structure to a model of a 21st-century professional services business.

Formerly the national president of the American College of Real Estate Lawyers, John has established a remarkable career in the practice of real estate law, representing national, regional, local, and governmental owners and investors, and playing a significant role in some of the most complex real estate redevelopment projects in the United States. For his legal accomplishments, he has been called one of “the 50 most influential diverse attorneys in America” by the National Bar Association and one of “100 Managing Partners You Need to Know” by Lawdragon, among myriad other acknowledgements of his leadership and influence. He has been honored not only for his legal leadership but for his entrepreneurialism, his spirit of
excellence in the pursuit of racial justice, and his devotion to education. John’s personal motto, which has become a core firm value, is, “Everybody counts, every day,” and that philosophy invigorates everything with which he is involved. He is driven by a powerful sense of fairness, and he believes there are few problems that cannot be solved through objective, reasoned persistence, pursued in good faith. He’s an imaginative problem solver, a uniquely critical thinker, a voice of wisdom and long experience, a connector of power players, and a fully tested leader. Depend on him to make big things happen. 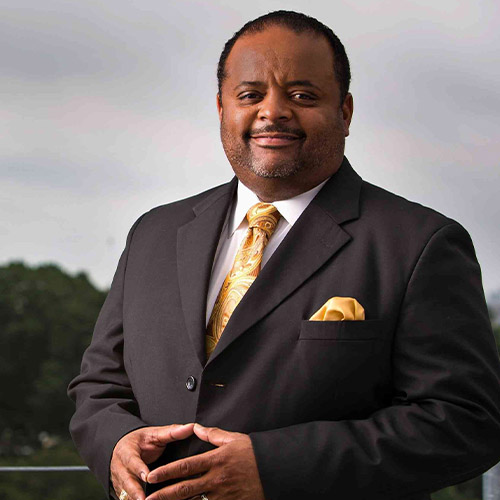 Over the course of a journalistic career that has seen him interview newsmakers ranging from multiple U.S. presidents to the top athletes and entertainers in Hollywood, Roland S. Martin is a journalist who has always maintained a clear sense of his calling in this world. Martin is the host and managing editor of TV One’s News One Now, the first daily morning news program in history to focus on news and analysis of politics, entertainment, sports, and culture from an explicitly African American perspective. News One Now airs weekdays on TV One at 7AM/ET. Martin is a senior analyst for the Tom Joyner Morning Show, where his twice-a-week segment is heard on nearly 90 stations nationwide. He is also the creator/curator of AllThat.TV, a digital lifestyle and information website he launched in July 2017. He is also the creator, host and executive producer of “Roland Martin Unfiltered,” his daily podcast that launches July 31.

In February 2017, Martin earned his third NAACP Image Award when he was named “Best Host,” in the first year the category was created, defeating the likes of Steve Harvey, Anthony Anderson and Tracee Ellis Ross, Joy Ann Reid and W. Kamau Bell.

He is the 2013 recipient of the National Association of Black Journalists’ (NABJ) Journalist of the Year Award, and has received more than 40 professional media awards, as well as honors by numerous organizations for his contributions to the media. Martin spent six years as a CNN Contributor, and as a member of the network’s “Best Political Team on Television” earned the esteemed Peabody Award (2009) for their 2008 Presidential Election coverage. Roland has been named four times to Ebony Magazine’s 150 Most Influential African Americans list and was also named one of the Top 50 Political Pundits by the Daily Telegraph in the United Kingdom.

Martin is the author of three books: Listening to the Spirit Within: 50 Perspectives on Faith; Speak, Brother! A Black Man’s View of America; and The First: President Barack Obama’s Road to the White House as originally reported by Roland S. Martin.

A 1991 graduate of Texas A&M University, Martin has been honored with honorary degrees by Florida Memorial University; Lemoyne-Owen College; South Carolina State University; University of Maryland-University College; and Lane College. Roland is married to the Rev. Jacque Hood Martin, author of “Fulfilled! The Art and Joy of Balanced Living”. They reside in northern Virginia.

At AACCWI, we champion the growth and sustainability of African American owned businesses by providing access to capital, education and advocacy through capacity building and strategic partnerships. The Breakfast of Champions is your chance to be a part of this impact, while connecting with other leaders in the business community.